A brand new Routes into Languages initiative has tested the foreign language skills of thousands of North West school pupils, with 12 going through to represent the region at the National Final in Cambridge.

Over 8,500 school pupils from around 70 North West schools have been taking part in a new teaching initiative, which sees year 7 pupils competing to spell the highest number of words in a foreign language.

The Spelling Bee, launched on the European Day of Languages in September 2010, uses the format of traditional Spelling Bees to encourage young pupils to learn new vocabulary in French, German and Spanish.

On Wednesday 16th March the North West Regional Final was held at Manchester Metropolitan University (MMU), where 100 pupils, who had won earlier rounds of the competition, came together to fight for a place in the National Final.

Dr Sharon Handley, Director of Routes North West and Head of Languages at MMU, said: “Languages play such a vital role in education and beyond, but they are a hugely under-used resource in the UK. We hope this competition has served its purpose in teaching younger pupils the benefits of learning languages.”

Twelve pupils have now won their place in the National Final, which takes place in Cambridge in July 2011. At the grand final pupils from across the country will come together to compete, determining an overall winner for French, German and Spanish.

Regional finalists came from schools across the region, including Stretford, Bury, Oldham, Lancaster, Wigan, the Wirral, Liverpool and Cheshire.

Sarah Durkin from Priestnall School in Stockport, commented: “The Spelling Bee encouraged my pupils to really learn the French alphabet. It also provided the opportunity to get my year 11s to meet with year 7s regularly, supporting them with the competition. We hope it continues in future years”.

2011 will be the third year that Routes into Languages produces its popular 'Why Study Languages?' calendar.
New for 2011 is the addition of interactive support materials that are designed to generate classroom discussion. These resources will draw on other areas of the curriculum including art and design, music, food technology, creative writing, history and culture and geography.
At just £6 including p&p, it's fun and ideal for raising awareness of a wide range of languages.

"The calendar has been a super resource, sparking interest and debate at a number of levels ‑ thank you again"

"The calendar you produce is fantastic and every Language Centre should have one ‑ what a great way to see different languages, scripts and alphabets with excellent images to match"

"As Head of Modern Languages I would like to congratulate you on the 2010 Why study languages calendar. It has been a joy to turn from one month to the next and learn about different countries and language"

Multilingual Manchester is based at the School of Languages, Linguistics & Cultures at the University of Manchester. Their aims are:

Their activities bring together university students, experienced researchers of international repute, community representatives, and members of local services. Together they want to celebrate Manchester's linguistic diversity while building bridges among communities and encouraging individuals to learn more about their neighbours and their cultures and languages.

Check out all the latest news from Routes NW, in our Autumn 2010 newsletter.

FILTA (Film in Language Teaching Association) offers a collection of teaching resources that make it easy for language teachers and lecturers to use film as a language and culture resource.

You can contribute to the community site and download resources such as study guides, podcasts and vodcasts for Arabic, Chinese (Mandarin), English as a Foreign Language (EFL), French, Spanish and Urdu. Resources for other languages will be added soon.
You can also find inform

Become part of a growing network of language colleagues where sharing resources on film is free.

To find out more and to join our network, please visit the FILTA website.

Develop your classroom expertise by joining our practical 20-hour course for Arabic teachers of Arabic and Chinese teachers of Mandarin Chinese.

The course is packed with practical ideas and suggestions for making your classes more motivating, more enjoyable and more memorable. All the ideas we will share with you are designed to make your classes more effective and to help you prepare and teach lessons that will help your students make rapid progress.

These ten week courses last for 20 hours in total and cost just £140.

For further details and a course outline please contact:
langcourses@mmu.ac.uk or call 0161-247-3945.

We have a team of trained Student Ambassadors who can come into your school or college to deliver a 'Why Study Languages?' talk to your pupils. This can last between 20 minutes to 45 minutes and explains the personal and professional benefits that languages can bring. This can be pitched at any age group.

To cover our costs, there will be a fee of around £30 for each visit (it might be more depending on your location and associated travel costs).

If you would like to book a talk, please get in touch and let us know the date and time you would like a speaker, the age group and the number of pupils. Email us at routes@mmu.ac.uk.

To be launched on the European Day of Languages, the aim of the Spelling Bee is for students in Year 7 to practise and improve their vocabulary, spelling and memory skills in a foreign language (French, Spanish and German) and to raise the profile of language learning through a class, school and regional competition.

Due to its success last year in the East of England, Routes into Languages have decided to roll this out nationally. Each region will hold competitions, run by the Routes regional teams. The winners will meet in July 2011 for the National Final in Cambridge.

For more information, please click here to view the flyer. If you would like to take part, please complete and return the registration form. 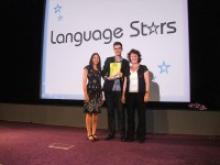 We are pleased to announce that the North West entry "Bacon Butty" won the LAFTA Award for the category of World of Languages. The video clip was produced by students from Cumbria University and was praised for its quality of shooting, and its strong message that it is not cool to be monolingual.

You can view the winning clip through this link (it is clip number 21):
http://www.languageswork.org.uk/learner_zone/the_laftas/peoples_vote/shortlisted_videos.aspx 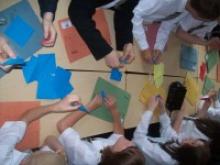 Congratulations to Jake McLaughlin from Irlam and Cadishead High School for his excellent account about the Language Enrichment Day held at the University of Manchester! His school awarded him with a £10 gift voucher, as well as presenting him with a certificate and medal for his achievement.