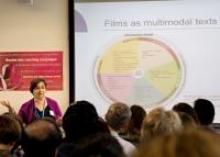 How can going to the movies help students gain a better understanding of other languages and cultures? Eighty language teachers came to the Routes into Language North West INSET Day at Manchester Metropolitan University to find out just that.

The teachers took part in workshops where they watched films in French, Spanish, German, Urdu, Mandarin and Italian.  The objective was for them to learn the basic tools and language of film analysis to use with their students when they talk about films. They learnt about setting the scene, props, lighting, colour and mood, costume, hair and makeup, camera shots and movements, camera angles, performance and editing and how all these aspects come together to make a film.

The day provided the teachers with lots of innovative ideas for using film analysis to engage their students.  The intention was to provide teachers with a valuable tool to enable them to increase motivation for learning to communicate in another tongue.   Foreign language films are fantastic for showing just how relevant and accessible language can be as well as providing a valuable insight into the culture of another country.

The course, entitled ‘Visual Literacy: Using Short Films for Teaching Languages at GCSE and A Level’ was led by Manchester Metropolitan University’s resident Spanish film and language expert, Carmen Herrero.  Carmen has been instrumental in setting up the ‘Film in Language Teaching Association’ (FILTA).  This brings together those using film to enhance teaching and learning and promotes the sharing of resources and good practice by supporting and hosting a variety of events and workshops. www.filta.org.uk