New research from the British Council and the International Unit on students' motivations for studying, working and volunteering abroad.

The Year Abroad Awards 2015 are designed to celebrate and reward UK students who have spent time working, studying or volunteering abroad during their degree. The ten categories have been carefully selected to showcase the qualities that epitomise a year abroad student - creativity, bravery, ingenuity, a global mindset and a sense of humour! The deadline is on 13th September 2015. New sponsors and prizes to be announced!

To enter the Year Abroad Awards, you must be a student at a UK university (or have graduated from a UK university within the past year) and have spent up to a year studying, working or volunteering abroad during your degree. Please check out our FAQs and T&Cs for more information about the Awards, and scroll down to read more and enter.

REMINDER: Only a few days left: the closing date for nominations is Friday 31 July 2015

IoL Educational Trust (IoLET), the awarding body of the Chartered Institute of Linguists, invites nominations for the Threlford Memorial Cup 2015. The cup will be presented to the winner at an awards ceremony in central London in November.

The Threlford Memorial Cup is awarded annually to an individual, organisation or project making a significant contribution to 'fostering the study of languages', in the words of CIOL founder Sir Lacon Threlford. The runner up receives the David Crystal Trophy, kindly donated by renowned linguist and CIOL Honorary Fellow, Professor David Crystal.

The awards have attracted a wide variety of nominations in previous years and recent winners include the Arsenal Double Club Languages, thirdyearabroad.com and GCHQ's Language Outreach Project.

Anyone wishing to submit a suitable candidate for the award should download the nomination form from the Annual Awards 2015 page of the CIOL website, complete in full, supplying two referees, and send by email to comms@ciol.org.uk This email address is being protected from spambots. You need JavaScript enabled to view it. .

Debbie Butler
Communications and Marketing Manager
deborah.butler@ciol.org.uk This email address is being protected from spambots. You need JavaScript enabled to view it.
020 7940 3105

Discover the world's greatest languages, festivals and culture, right here in the UK !

Welcome to our #YearOverHere Campaign, in partnership with Routes into Languages.  As linguists, we tend to have our gaze fixed outside the UK (especially when planning - or pining! - for our time abroad) - so much so that we often forget to appreciate the incredible intercultural opportunities we have here at home! As part of our campaign we have collected listings of upcoming UK-based foreign cultural events** and courses, language-enhancing resources and top tips to help you immerse yourself in a foreign culture in order to hone your global skills - all without leaving the UK!

For further details go to:

Routes into Languages is launching a series of webinars covering the topic of employability as part of a strand of online dissemination activity which HEFCE has asked us to carry out and which was discussed at a recent Project Managers' meeting.

The first webinar 'Working as a translator or interpreter: ask the experts!' is scheduled for Friday, 10 July 2015, 12.30-1.30. The event aims to address an audience of students, teachers and trainers who are invited to ask questions to a panel of experts.

Please, visit https://www.routesintolanguages.ac.uk/Live to find out more details about this event. 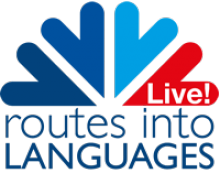 Join us at 12:30pm (BST) on the 10th July for first live webinar session about careers for linguists. It is aimed at students, teachers and trainers who share an interest in translation and interpreting for the private and public sectors.

We look forward to seeing you at the Routes into Languages stand (no 6)!

As political parties put together their manifestos for the 2015 General Election, what better time to write to your MP to highlight the importance of policies which support language learning in schools, universities, businesses and the community?

By writing to your MP you can support the All-Party Parliamentary Group on Modern Languages’ call for a 5-point plan to improve the UK’s language capability and in supporter of learners, teachers and all who benefit from language skills.

You can help by:

§  asking them your questions (letter templates below)

§  Send us your questions and their reply.

Speak to the Future will publish letters on this website when permission has been given.

Speak to the Future will work closely with the APPG on Modern Languages to enable it to be better informed about MPs’ support for pro-languages policies, and which MPs are most supportive. Read more about the APPG on its website.

Remember, MPs are duty-bound to reply to their constituents – so let’s get them to show their support for languages!

So, how can you get involved? It’s easy!

2) Send them a letter asking for their views. You might like to use one of our templates for inspiration. Feel free to amend these to include your own views and questions!

Download the Letter-writing pack (Zip, 879KB): WriteToYourMP-LetterWritingPack - includes these instructions and all letter templates in Word and a copy of the Manifesto for Languages.

3) When they respond, you might want to send a follow-up letter, thanking them and inviting them to develop their views and endorse the Manifesto for Languages if they haven’t already done so. For example, use our template Follow up letter

Tip: If your MP has already replied to this campaign already, you might want to go straight to the Follow-up letter.

4) Remember to send any letters you receive to info@speaktothefuture.org

5) We will then publish it (with permission) and pass on the information to the APPG on Modern Languages. Look out for publication and if you are on social media, please share!

Please note that we can only post electronic documents: a scan (image or PDF), or an email.

Our aim is to get a response from a majority of MPs between now and the election. You can help us get there – we look forward to hearing from you!

If you have any questions please don’t hesitate to get in touch on info@speaktothefuture.org

This event held on Tuesday 28 April 2015 in Central London is CPD Certified.

Scheduled to follow the release of the British Council's annual Language Trends survey, this seminar will provide a timely opportunity to consider the current and future state of language learning in England's education system up to the age of 18. It follows the A-level Content Advisory Board's (ALCAB) report on Modern Foreign and Classical Languages, which highlighted a 'grave decline in the numbers studying MFL (modern foreign languages) beyond the age of 16'.

Delegates will discuss the specifications for MFL subjects at GCSE and A-level, planned for September 2015, as well as the challenges surrounding implementation and first teaching in 2016. Other areas for discussion include steps to be taken to tackle widespread concern that students tend to regard languages, particularly at A-level, as 'hard' and of little future value, as outlined in a recent review by the Joint Council for Qualifications (JCQ). In addition, the conference will also look at concerns raised by employers and businesses that languages are no longer taken seriously, as detailed in the CBI-Pearson annual Education and Skills Survey.

Further planned sessions will consider measures to improve the take-up of MFL at Key Stage 4, such as Government's proposal to pilot foreign language 'teaching hubs', and efforts to increase the number of language teachers within primary and secondary schools. Additional areas for discussion include the role played by foreign exchanges and technology in supplementing the language learning experience, as well as the benefits of languages for the economy.

To view the latest agenda or book a place, please visit:
http://www.westminsterforumprojects.co.uk/forums/event.php?eid=947&t=8569