An opportunity for teachers in the region to meet, chat, network and share ideas

In the box at the bottom of the form, please add a little info about your presentation, if you'd like to give one including whether you'd like a 2 minute, 5 minute or 10 minute slot. 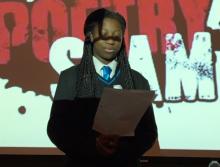 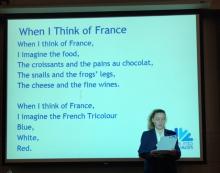 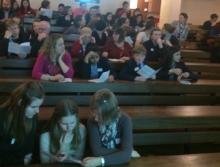 Wow, they were fantastic!!!

On Tuesday 13th December a record number of students, together with their families and teachers descended on Routes into Languages East, in our new home at Cambridge University.

The Mother Tongue Other Tongue project (originally devised by staff at the Faculty of Humanities, Languages and Social Science at Manchester Metropolitan University and Routes into Languages North West. Piloted in 2012, it has been adopted as a Laureate Education Project and shared with regions across the country) has grown and grown each year. This year of the hundreds of entries submitted to teachers, 64 school winners  (Year 7 - Year 12) from 13 schools were submitted to Routes into Languages East for the final judging. All the shortlisted poems were included in the printed Anthology, which each student was given as a prize (more copies are available here at £5 per copy - email ss2431@cam.ac.uk to request a copy).

There was a huge wealth of wonderful poetry submitted this year and our panel of judges (consisting of language and poetry experts) often found it very difficult to select the winners. So difficult, in fact, that the original plan of a winner per key stage was abandoned and winners and highly commended prizes were awarded for each year group submitted:

The 120 students, teachers and parents seemed to really enjoy visiting the the Faculty of Modern and Medieval Languages at Cambridge University where the Celebration Event was held in the Little Hall lecture theatre. The programme included the awarding of prizes, with some poets performing their poems, as well as an amazing Poetry Slam, led by Slam Poetry UK Champion, Joelle Taylor (click on her name for a link to her website or here to see her performing her powerful poem, 'Last Poet Standing', one of the poems she performed at the Celebration Event), featuring young poets from a group of 14 Voyager Academy students from Peterborough, who had taken part in a workshop with Joelle on Language & Identity at the University in the afternoon. This was Joelle's second time headlining for Routes into Languages East and once again the students absolutely loved her!

The Celebration Event was great fun - well done to all the poets and their teachers!

This event is fully booked

Huge congratulations to them as well as all the winning regional finalists who attended the national final and all their teachers! They were the final 103 competitors out of the nearly 75,860 who started the competition!!!

The winning school in each language will also receive a KS3 licence for 2016/7 from our other generous sponsors Vocab Express.

NB: Please provide details of whether you're entering the Primary or Secondary (Continuers and/or Beginners) and the number of pupils competing in each in the comments box at the bottom of the form.

Wednesday afternoon saw 50 Year 8 pupils from seven Peterborough schools, The Voyager Academy, Ormiston Bushfield Academy, Hampton College, Jack Hunt School,  Ormiston Bushfield Academy, The King’s School and Ken Stimpson Community School fight it out on Wednesday in the final of the Have Your Say competition in the presence of the Deputy Mayor and Mayoress. All the students were the winners of their school competitions  for which they had learnt and performed dialogues in French, Spanish, German and Urdu.

The final competition was hosted by Thomas Deacon Academy, organised by teacher, Anke de Munster, with help from her impressive band of sixth form Language Leaders and sponsored by Routes into Languages East at Anglia Ruskin University.

The instigator of the competition, Rachel Hawkes of  The Voyager Academy and The Cam Academy Trust said “ Speaking is, without a doubt, the most important skill in language learning, but also one which causes the most anxiety.  It is exciting to see so many students enjoying speaking languages and performing at such a high level in front of an audience. ”

The pupils really seemed to enjoy the afternoon, and the standard was extremely high, even higher than last year’s inaugural competition.  The winners’ trophy went to Aleksandra Waligora  and Joanna Zajac of The Voyager Academy for a lively Spanish dialogue, fluently delivered with excellent Spanish pronunciation and great expression.

The other top ten winners were:

Well done to all 50 competitors (and their teachers!) who  were all winners to  get this far and represent their schools.

A fun, lively sing-along musical in French about Pinot who dreams of winning the Tour de France. It's no simple task though and he has many obstacles to overcome – not least the fact that he's an illegal Russian immigrant and is being pursued by the French police!

Written by Marie Atallah and performed by local secondary school pupils. A song and dance extravaganza with styles ranging from Russian Cossack dancing to  Rock n Roll with everything in between………Heavy Metal, Tap Dancing, Bluegrass…… you name it!   The ultimate ‘sing along in French experience’!

Suitable for everyone who knows just a little French, or would like to learn

Tickets are free (but please click here to donate to the official Tour de France charity from 2014, Marie Curie)

The conference is suitable for teachers and trainee teachers of Modern Foreign Languages at secondary schools as well as sixth form or college.

The programme this year includes a presentation by Rhona Thomson from the AQA examination board about the new GCSE and A-Level specifications, practical workshops on how to stimulate creative writing in a foreign language, strategies to teach translation skills, and the emotional intelligence of teachers.

Teachers are invited to contribute to a poster session / bring-and-share discussion with practical ideas on how to teach translation and creative writing, or any other brilliant ideas from their own teaching practice.

Over refreshments there will be opportunities for networking and discussions, sharing views and experiences from the classroom.

Our conference website with more information and material from previous years: https://www.essex.ac.uk/langling/conferences/teachers_day/

Attendance is free of charge and includes refreshments – the conference is funded by Routes into Languages East.

For more information and to book your place, click here

This is a competition for groups of Year 8 and 9 pupils to devise and create a languages board game for a clearly defined target market with a sport/Olympics theme.

There will be Amazon voucher prizes for 1st, 2nd and 3rd places and a copy of the winning game will be manufactured by Adrenaline Brush Ltd (a game designing company).

The deadline is Friday 20th July, 2017. Certificates and points-based medals for teams (for 50 points and over).

List of Supporting Documents etc (for documents themselves, see below):

4) How to run a Spelling Bee competition - Stage 17