Devised by Comberton Village College, the aim of the Spelling Bee is for students in Year 7 to practise and improve
their vocabulary, spelling and memory skills in a foreign language (French,
Spanish and German) and to raise the profile of language learning through a
class, school and regional competition. 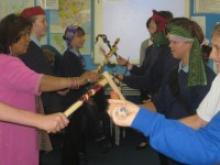 The walls of Impington Village College shook today with the sound of year 9 pupils from five schools enjoying language and culture in a celebration of European Day of Languages.

The day was jointly organised by language teachers from Impington Village College, Cottenham Village College, Melbourn Village College, Witchford Village College and Swavesey Village College led by Eddy Moore, Director of Languages, IVC and Routes into Languages, a government-funded project promoting language to 14-19 year-olds.
Called Languages Live!, the event was a celebration of creative work done by KS3 students during languages lessons at the five participating schools. It is the culmination of a two year collaboration. Nearly seventy students gathered at IVC to share their plays, poems, videos and brochures in a range of languages. In the afternoon, aided by Student Language Ambassadors from Anglia Ruskin University (Anglia Ruskin is the lead institution of Routes into Languages East), the KS3 students participated in sessions of Japanese Language and Culture, Caribbean Dance and Hindi Stick Dancing. They all showed great language skills and fantastic imagination.

Said Sarah Schechter, Project Manager of Routes into Languages East “The day has been so inspiring. It’s wonderful to see the creative work that language teachers are doing with their pupils and heartening to know that these pupils will be so well placed in the future because of their enthusiasm for, and knowledge of, language”

Click here for information about the Language on Film competition: rilanguageonfilm.wikispaces.com

Feedback from participants in the Language Learning Partnership programme