SOAS, University of London are organising the language-event IllumiNations where visitors can experience the diversity of language and culture through a range of interactive events and activities...

The School of Languages, Cultures and Societies at the University of Leeds recently welcomed fifty GCSE linguists from three Yorkshire schools to campus for a day of experiencing languages....

Save the date !  "Languages for business" will be the third in a series of webinars covering the topic of employability as part of a strand of online dissemination activity.  It is... 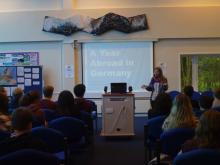 On Saturday the 7th of November more than 60 students from 10 local schools met  at Farlingaye for a day of talks and workshops on all things German. The programme included a talk by Dr Martin...

Could you design a sports kit or a water bottle for the Rugby World Cup using a foreign language element? Do you have the IT skills to make a video advert or business pitch to accompany your...

Languages: Careers Beyond the Obvious

Last month, the University of Nottingham hosted a careers event funded by Routes in Languages East Midlands and the Higher Education Funding Council for England (HEFCE) to inspire languages students...

York St John Business School were delighted to host another celebration of language and culture to mark the European Day of Languages, attended by YSJ staff, home and international students, and...

"Going Global!" at University of Hull

On Tuesday 3rd November 2015 pupils from across Yorkshire and the Humber were invited to take part in the return of a revamped version of ‘Going Global’, an event for Year 10 and 11 pupils at The... 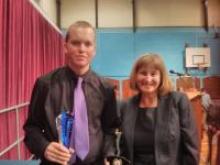 Eight young people from Launceston College were nominated for an award in languages at a very exciting evening of prize-giving and music on 12th November.   Those nominated for the Dr....

What Routes into Languages can do for you and your school

We were delighted with the response to our poster competition to celebrate the European Day of Languages 2015. The winning schools have all been contacted and are: Woodlands Community College; The... 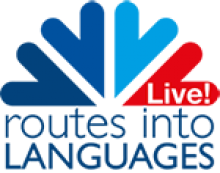 #RoutesLive: the next webinar will take place on 23 October 2015

The North-East region will host the next #RoutesLive webinar Routes into Language Teaching on Friday, 23 October 2015, 13:00-14:00. Join our online panellists to hear about their pathways into MFL...

Language Teacher and Student Language Ambassador of the Year Award 2016

Do you know a very special language teacher or a student language ambassador?   A teacher who inspires pupils through superb teaching and supports colleagues by sharing their expertise and...

Languages and your Future: A new employability resource

A new employability resource, Languages and your Future, aimed at 11-13 year old pupils will be distributed shortly to all the regions. In the meantime, you can have a glimpse of the activities... 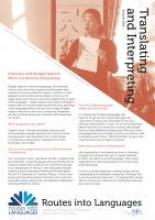 This newsletter will give you a brief overview of recent events that have been organised by National Networks for Translation and Interpreting. The ‘Routes Live!’ webinar and ‘...

Routes into Languages is at the London Language Show Live 2015