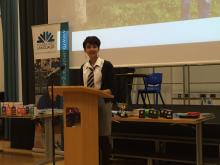 All winners & runners-up are invited to compete in the South West Regional Final on Wednesday 29th June at the University of Bristol: https://www.routesintolanguages.ac.uk/events/celebrating-success-mfl-pop-video-speaking-competitions-regional-finals-1