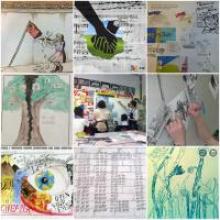 The Wall that divided the city of Berlin between 1961 and 1989 was the most potent symbol of the Cold War, representing the division of a continent into two hostile blocks. Closer to home, for the people of Berlin, it represented enforced separation from family and friends. On the night of 9th November 1989, when border guards finally gave way to the peaceful revolutionaries of East Germany and opened the checkpoints, the world witnessed euphoric scenes as East Berliners streamed through the suddenly redundant border and family members and complete strangers fell into each other’s arms amidst popping champagne corks, tears of happiness, and shouts of joyful disbelief.

November 2014 marked the twenty-fifth anniversary of that extraordinary night, and October 2015 will see the twenty-fifth anniversary of the reunification of West and East Germany that followed. To commemorate these events, the German Department of the University of Bristol (http://www.bristol.ac.uk/german/) has joined forces with ten local secondary schools and Europe’s biggest street art festival, Upfest, to produce a public art project entitled ‘What I would have painted on the Berlin Wall’. The project is generously supported by the University of Bristol and Routes into Languages South West (https://www.routesintolanguages.ac.uk/southwest).

The project coordinator, Dr Debbie Pinfold http://www.bristol.ac.uk/sml/people/debbie-m-pinfold/overview.html, is a lecturer in German at Bristol and the Schools Liaison Officer / for the university’s School of Modern Languages. She followed the events leading up to the fall of the Berlin Wall on TV as a second year university student, and experienced the night of German reunification first hand on her year abroad in Hamburg; she now teaches a module to final year university students on the way the former East Germany is remembered in contemporary German culture, but says she is all too aware that neither her students nor local school children had been even been born when the Wall fell. The Berlin Wall art project is an attempt to make this seismic event in European history real and exciting to local school children by engaging them with German history in a creative way that goes beyond the classroom; the graffiti that covered the west side of the Wall in a form of colourful protest provided an obvious link with Bristol’s own vibrant street art culture, and the German department was delighted when the Upfest organisers agreed to host the project. Dr Pinfold has been visiting schools to talk to pupils between years 8 and 13 about the history of the Berlin Wall and its fall, starting her talks by showing the young people a map of Bristol and asking them to imagine waking up the next morning to find a fortified wall running through their own city and separating them from family and friends. She has been thrilled to see how fascinated they have been by the topic and amazed by the sheer variety and creativity of their artistic responses.

Each of the participating schools has run an internal competition to find its designs for the West and East sides of its own 8’ by 6’ panel. Once the winning designs have been selected the young people will paint their panel and the finished products will be displayed outside St Francis’s Church on North Street for the duration of Upfest. Watch this space!!