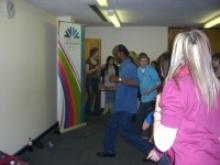 On Thursday 17th December we were visited on the Anglia Ruskin Cambridge Campus by nearly 50 year 9 pupils from Thomas Clarkson Community College in March and their teachers for an ‘Options’ Day. As they were about to make their GCSE choices their teachers wanted them to visit a university campus and learn about the importance of languages for their futures. The day began with Language & Culture Taster Workshops in Portuguese, Russian and Hebrew. The teachers (and the pupils themselves) were very impressed to see how successfully former language knowledge could be applied in learning new and unfamiliar languages and how much could be learnt in a relatively short session. The pupils then had a taste of life on campus with lunch in the Street Restaurant, followed by a “Why Study Languages?” presentation. The day ended with a taste of yet another culture with a Caribbean Dance Session in stark contrast to their subsequent run to catch their coach through the heavy snow. In discussion during the day, the teachers lamented the fact that the pupils are not usually given the opportunity for visits such as these and noted how much difference they felt the day had made.