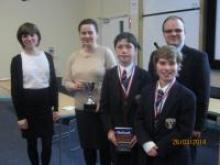 Having been selected as the top-performing pupils in their schools to compete in the regional final categories of French, German and Spanish, the competitors represented the very best from amongst 3500 pupils who initially registered to take part from 26 North East schools. On hand to help with the running of the competition were our fantastic native-speaker judges and a trusty team of student ambassadors.

Nerves were running high for pupils and teachers alike as our brave Year 7 pupils – 36 for French, 13 for German and 10 for Spanish – took to the stage to test their spelling prowess in the space of just one minute. Once the top four contestants for each language had been identified, it was time to find out who would be crowned in first, second, third and fourth places here in the North East.

Thanks to Whickham School, you can hear all about the day from a pupil perspective in a BBC School News Report available here. Pupils Abbie and Ella recorded teachers, organisers and contestants alike as part of their podcast project - great work, girls!

Extra special congratulations go our overall winners on the day:

All twelve contestants in Round 2 are winners, however, and will represent their schools in the national final on Friday 4th July. We wish them every success in the next stage of the competition!