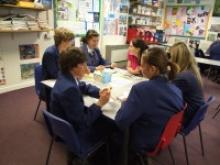 Oral examinations in Modern Languages fill many students with dread. However, Cams Hill School in Fareham has found a way of making them seem less intimidating for their GCSE candidates by organising an intensive revision workshop to help pupils make final preparations for the speaking test.

On 22 April, undergraduates in Modern Languages from University of Southampton visited Cams Hill to help with the workshop by giving the young learners extra practice in small groups for oral in French, German or Spanish. And indeed, the university students clearly knew what the GCSE candidates had in store. Will Travers, first year undergraduate in Management Science and French commented ‘Three years ago I was studying GCSE French. This made it easy for me to relate to the students.’ Indeed, working with undergraduates clearly has benefits for the younger learners, for as Ella Dove, first year in English and French, commented ‘Conversing with those who have recently been in a similar position within their own academic studies allowed Cams Hill pupils to express themselves openly and confidently, in a manner which they would perhaps not otherwise have been able to achieve in a more formal classroom setting.’

It was not only the pupils who gained from the experience. Chris Harper, first year student in German, pointed out ‘The students got a chance to see if teaching was something we'd consider as a career.’ Dr Ian McCall, Senior Lecturer in Modern Languages, who liaised with Cams Hill for the workshop, commented ‘Routes into Languages South is delighted to have provided the undergraduate helpers. Hopefully they will have inspired the pupils to continue with their language study beyond GCSE by communicating their own enthusiasm for languages to them.’