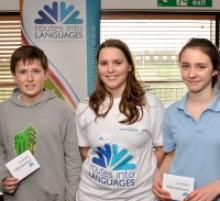 280 pupils from eleven schools in the South took part in two days of football and French at University of Southampton on the 23rd and 24th March as part of our successful “Score in French” project. The activity was piloted last year with six schools but as research showed it was so effective in increasing motivation in Year 8 pupils, it was decided to extend the project.

“Score in French” provides teachers with an extensive resource pack to teach French in relation to football. After using the materials in class, schools are invited to send teams to compete in a cross-curricular tournament, in which football playing, cheerleading in French and creating art work linking French and football are integral parts. ‘Teachers have reported that the need to work hard in French to be part of the school team for the tournament has motivated many pupils’, commented Clare Forder, Routes into Languages Project Manager.

And indeed pupils who come to the tournaments enjoy an exciting, action-packed day with Modern Language students, who referee matches in French and involve the pupils in a range of pitch-side language activities. Project designer, Dr Ian McCall, remarked that ‘the football theme and the tournaments give our students a fantastic opportunity to share their joy for language learning with school pupils and this will result in more pupils continuing studying languages and an increased number of excellent applicants for MFL teacher training courses.’

This year schools came from across the region to compete and whilst the Tuesday trophy was taken by Hamble Community Sports College, a ‘home’ team, the Willink School were certainly pleased to have made the trip to Southampton when they headed back to Reading with the Wednesday trophy. Prizes for the winning teams were provided by Saints in the Community who have supported the project from the outset.

The “Score in French” resources are available free of charge to all schools and a slimmed down version has been created in Spanish in time for the World Cup.

Please click here to view event photos from March 23rd and here for those from March 24th.  A podcast from this event is also available here.