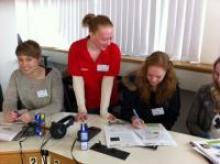 Over 160 secondary pupils and A-Level students from all over Yorkshire and the Humber descended on the Modern Languages Department at the University of Hull to take part in GCSE and AS/A2 level revision session on 19th, 20th and 21st March 2013.

The event, organised by Routes into Languages, included sessions in French, German and Spanish.

Claire Barber, Project Manager of Routes into Languages Yorkshire and the Humber, welcomed students and then it was straight on to the vital aim of the day – to revise as much of the target language as possible on key topics in preparation for the final exams in May and June this year.

Students were divided into groups and went into language sessions with a university tutor and Student Ambassadors. There were 8 ambassadors on hand each day to help the pupils and students in their revision sessions and interacted well with them. The ambassadors were international – a vital mixture of native German, French, Spanish and also 4th year English students.

During the lunch break pupils were shown the campus, including the Student Union, library and the Language Learning Centre by the Student Ambassadors and provided a good opportunity for the pupils to get a better feel for the University and campus life. In the afternoon there were further revision sessions in the three languages and these were taken up with vigour.

Comments by pupils and teachers at the end of the day were enthusiastic and many expressed the hope that there would be further sessions of this type. After the events, one teacher said: “It gave our students a different kind of learning experience and was a chance from them to compare their own skills with those of pupils from other schools, which boosted their confidence.”

The students were equally enthusiastic about the revision sessions. Of the GCSE day one pupil said:

“I learned lots of new vocab which will help me with my upcoming German exam.” Another pupil on the AS day commented: “Very informative and I would like to do this again.” And another said: “It was a good chance to practise speaking and build confidence.” Overall the event was a success, so thanks to all those involved.