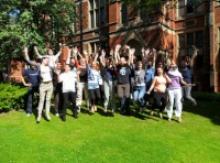 The Linguastars residential held at Leeds in 2009 proved so popular that we did it all over again this year!

The two-day residential took place this year on July 1st and 2nd. We had 22 AS level pupils who attended from schools and colleges from across the North of England. The aim of the event was to introduce the students to University life, to provide them with an opportunity to develop their A level target language skills and to try new subjects which they otherwise might not encounter during their A level courses.

After a lively ice breaker session on Thursday morning (which involved being a barnyard animal and then building the tallest possible tower out of balloons, drinking straws and sellotape), the students got down to some hard work, attending language workshops in French, German and Spanish as well as trying out subjects like Linguistics, World Cinemas and Portuguese. The most popular taster session, however, proved to be Interpreting, which allowed the pupils the chance to practise their interpreting skills (about knitting!) in the University’s Interpreting suite. In addition to these sessions, students had the opportunity to explore the campus and to get an insider’s perspective of what (not) to do on a UCAS form.

Thursday evening gave all those who attended the chance to experience the lighter side of University life as they went to a local restaurant for a meal and then stayed overnight at a nearby Halls of Residence. On Friday, the students continued to attend workshops, in preparation for a target language presentation session at the end of the day, with a prize on offer for the best presentation. Despite some stiff competition from two very informative presentations in Spanish, a mime, a TV interview and ‘A day in the life of…’ in German, the overall winner was the French group who presented a short sketch about the lives of three University students all adeptly interpreted for those who didn’t speak French.

The positive feedback which we received from those who attended would seem to suggest that we will be running this event again next year! I would like to take this opportunity to thank all the students who came along, all the student guides who supported the event and all the staff who provided the workshop as they helped to make Linguastars 2010 so successful.