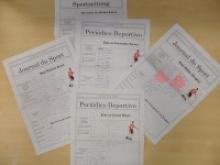 This football-themed event was held for thirty Year 9 and Year 10 pupils (all boys) from Danum School Technology College in Doncaster, Allerton Grange School in Leeds and Brigshaw High School in Castleford. The pupils took part in two language workshops in either French, German or Spanish. During the first workshop, pupils took part in a commentating activity and learnt new football-related vocabulary. In the second workshop, they then pretended to foreign language journalists, interviewing ‘famous’ football players (expertly portrayed by current undergraduate and postgraduate students from Leeds – together with some enthusiastic staff members) in their target languages. These interviews were then written up as newspaper articles with a prize being awarded for the best articles in French, German and Spanish. After lunch, the pupils enjoyed a tour of the University campus and then took part in a consolidation quiz with a football theme, answering questions on the vocabulary that they had learnt during the day as well as demonstrating their football general knowledge. The feedback for the day was really positive with nearly all pupils saying that they would consider going to university following the event, and two-thirds saying that they felt that the day’s activities would help them with their school work. It was the first event that I had organised since starting in the post of Routes into Languages Project Co-ordinator at Leeds and I am very grateful to the pupils and teachers who came along as well as to the student guides without whom the event would not have been nearly as successful!