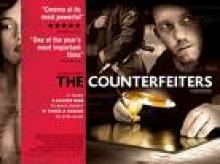 Film and modern languages make an explosive combination and this has a vital role to play in bringing MFL learning alive to young people.

Highlighting the 20th anniversary of the fall of the Berlin wall - “Die Fälscher” (The Counterfeiters) was screened in the Wilberforce building on December 9 organised as a joint partnership between Routes into Languages and Links into Languages Yorkshire and The Humber preceded by a teacher training session lead by Links. Taught by Bettina Steurer, lecturer in the German section of the Modern Language Department at the University of Hull, the emphasis was on methods of using film and media in language learning, particularly in AS/A2 lessons. Teachers were given resources to take away with them.

Thirty students attended from colleges and schools in the area and the comments were very enthusiastic. Ross, Year 12, said: “I really enjoyed the film. Thank you, it was a great opportunity and I would definitely come to another screening in both German and French. I will try to persuade more classmates to come next time.”

Another student commented: “I am really glad I came. The staff were friendly and not at all intimidating. It was a great film and very useful for vocab. I hope there are more screenings.”

Bettina Steurer, said: “I think that using films and media in the classroom is an excellent way to immerse students in the target language. This way the teacher can train all the different skills which a competent language user needs to master at a high level. These different skills are of course: reading, speaking, writing and listening.

“Watching a film is particularly useful as you not only hear what someone says but you actually see it. The more senses are used the easier students will remember the content. (This way it also appeals to different learning types). By showing films you can bring a lot of authentic material into the classroom (such as buying a ticket for the train). You can also impart culturally important information (for example: How do Germans behave in a certain environment? What does a German coffeehouse look like?). There are also great opportunities for bringing historically important information alive. Films are usually also emotional and research has shown that students can remember content and vocabulary better if they are emotionally involved with the activity.”

Bettina continued by stating: “With films the teacher can create multi-sensual learning situations and the students get a broader and more authentic picture of the target society. In my opinion the focus in language classes should not only be on the target language but also on the cultural differences between home country and the country whose language one learns.”

The aim of the event was to give teachers ideas and material (ready to copy and use) about how to use the film "The Counterfeiters" in the classroom as well as general ideas of how films can be best used. Different workshops for AS/A2 teachers are to be scheduled in the Yorkshire region on a regular basis, using films which convey contents which AS/A2 level teachers have in their curriculum.

A second screening on January 19th, in one of the new cinema style rooms in Wilberforce, was even more successful and as well attended. The film this time was “Das Leben der Anderen” (The Lives of Others”).

Again the comments from students and teachers were extremely enthusiastic. “It was interesting and insightful and a good chance to see an important film related to our topic work,” said one student from Wilberforce College. “I really hope there are more screenings like this.” commented another. “You got a visual idea of life in the former GDR. This is particularly useful for the course topic ‘Wiedervereinigung’ at college. I think it will give me extra topic knowledge for my exams.”

Links into Languages Yorkshire and the Humber is a new initiative is being spearheaded for the region from the Modern Languages department at Hull University and is designed to promote modern language learning, bringing together teachers and trainers across all school sectors. Manager Kerry Dobson said: “MFL teachers have been telling us that film screenings are an excellent way to help students tap into the possibilities from language, possibilities which include the literary and historical .We listen to teachers and students and with this in mind we have organised two highly successful screenings and more are planned for later in the year.”

The Links into Languages Yorkshire and the Humber workshop for teachers involved:

A.activities to do with your students BEFORE watching the film (e.g. to analyse the trailer) to get students interested.

B.activities teachers can do WHILE they are watching the film (e.g. analyzing short film sequences; guessing how a specific scene might continue; what kind of homework they can give to prepare students for cultural and historical issues, )

C.activities AFTER having watched the film. (eg. reading different film reviews and seeing whether if they agree with them)