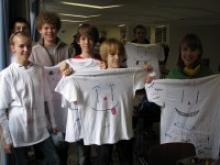 Students learning German at Patcham High School, Brighton recently put their language skills to the test when they visited Couven Gymnasium in Aachen, Germany for a week-long languages and media exchange supported by Routes into Languages South. The aim of the trip was to improve the Patcham students' German communication skills as well as to experience life in a German school and explore the different aspects of German culture.

The students from each school engaged in a variety of activities such as team games, designing team t-shirts and creating posters to display information about home towns. These activities were filmed by media assistants from Patcham High School as well as media and languages undergraduates from the University of Brighton. Students were also given cameras to record the activities themselves.

During their time in Aachen, the school groups visited the local Christmas markets, sampled traditional German food, spent time in the nearby city of Cologne and took a trip to the Dreiländereck where the borders of Germany, Belgium and the Netherlands meet.

Speaking about the trip, the English pupils reported that they were pleased to be given an opportunity to use their German skills in real-life situations and the German pupils explained they were keen to find out about school life in another country. Everyone involved spoke positively about the benefits of such an exchange and the students at Couven Gymnasium are very much looking forward to their return trip to Brighton in June!