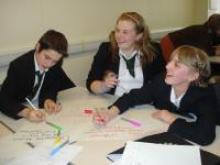 Throughout March, Routes into Languages, in conjunction with Network for Languages and CLERA (Centre for Language Education Research at Aston) held a series of cultural days looking at Spanish, French and German as world languages.

The events were for Year 8 pupils and featured workshops from native speakers and final year students from French, Spanish and German speaking countries around the world. The visitors took pupils on a virtual tour of their country talking about topics such as food, history, cultural celebrations and geography. They brought in food and delicacies from their home nations (some even homemade!), small artefacts and shared personal photographs and stories to really give students the desire to travel! The countries covered ranged from closer to home Switzerland, Luxembourg and Austria to further flung Paraguay, Quebec and Burundi. After their workshops, the pupils then worked in mixed school groups to design posters in the target language to demonstrate what they had learned.

The aim of the events was to show the languages the pupils are studying in school as world languages and to inspire them to continue studying languages at school and beyond.

While the pupils were busy travelling the world from their classrooms, we were fortunate to have representation from the French Embassy, the Spanish Embassy and Goethe Institut who delivered CPD sessions for the teachers. The visitors also judged the best poster created by the pupils and awarded prizes.

The events were a great success: a total of 180 pupils from 15 schools across the region attended.

To find out more about any of these projects please visit the websites: