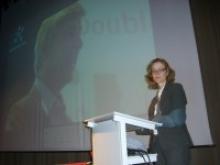 Cambridge: World Centre of Language
The Routes into Languages Festival of Ideas event, Cambridge: World Centre of Language, in partnership with Cambridge University Press and Cambridge ESOL was held at Anglia Ruskin University in Cambridge. It was an evening of connections and reminiscences. The idea for the evening came from the Routes Director, Dr Tony Morgan, who felt that the Festival of Ideas with this year’s theme of ‘Cambridge revealed: ideas that shaped the world; past, present and future’ offered the perfect opportunity to present the 'Cambridge Phenomenon' as a Linguistic as well as a Scientific dynamic which has had global effects. The idea further developed into an opportunity to make connections: between EFL and languages and their practitioners, past and present, linking ARU/CCAT with the EFL schools, to present a historic review/presentation of the role of Cambridge as a global centre for language/communication in the past half century
Melissa Good, Dictionaries Editor for Cambridge University Press delivered the first lecture in the Mumford Theatre. Melissa kicked off (!) with a video of Arsene Wenger telling how he came to Cambridge to learn English, and extolling the virtues of language learning (http://www.ukgermanconnection.org/cms/?location_id=705). Drawing on her research and the memories of Adrian du Plessis, she went on to consider the impact of the Cambridge EFL community in the 1950s/1960s/1970s, which produced the Cambridge Proficiency 'gold standard' of communicative language learning, the role of Frank Bell, Lennox Cook and the Studio School and the consequent impulse this gave to drawing into Cambridge a global community of students keen to learn English. This, in turn, injected a cosmopolitan and multilingual dimension to the small market town in the Fens and its growing bunch of EFL teachers, some of whom would go on to become Cambridge University researchers and promoters of Cambridge. Melissa went on to introduce the future with an outline of the English Profile project, a collaborative programme, creating a ‘profile’ or set of Reference Level Descriptions for English linked to the Common European Framework of Reference for Languages (CEFR).
There then followed a reception in the Ruskin Gallery, with an opportunity for networking and sharing reminiscences. Lee Knapp spoke on behalf of Cambridge ESOL and Annie Morgan James, Director of the Anglia Ruskin University Language Centre gave a welcome on behalf of the Faculty of Arts, Law & Social Sciences. She spoke about the importance of the Routes into Languages project and how exciting it was to have an evening celebrating the importance of both EFL and MFL. A presentation was then made to Tony Millns, the CEO of English UK, who has a long connection with Cambridge, to mark his 10 years in office.
The second lecturer was Barry Jones, Fellow in Modern Languages at Homerton College, who delighted the audience with his lively journey through the history of language teaching from 1658 with the publication of Comenius' Orbis Sensualium Pictus, showing how a wide range of methods and techniques for teaching modern languages have been proposed and put into practice for the last 250+ years. The presentation illustrated and explored a number of original materials, showing how pictures, sound, gesture, cartoons, film, humour and sometimes strange contexts have been used in an attempt to motivate modern language learners of all ages.
The evening was a huge success, with over 100 people enjoying the connections and reminiscences.