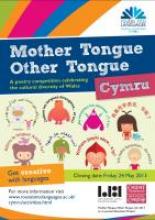 Routes into Languages Cymru, Literature Wales and Cardiff University have joined forces to launch a competition that celebrates the linguistic diversity and talent amongst young people in Wales.

This multi-lingual poetry competition called Mother Tongue Other Tongue 2013 will give young people across the country the opportunity to celebrate their home languages and also to get creative in other languages they are learning at school.

This competition was created by Manchester Metropolitan University and was piloted last year in schools in Manchester. It was such a success that Britain’s Poet Laureate, Carol Ann Duffy has adopted this project as a UK Laureate Education Project and is encouraging all young people across the whole of the UK to get involved. In Wales, we are very lucky to have support from our National Poet, Gillian Clarke and also multi-lingual poet, Mererid Hopwood.

Open to young people aged 9 to 18 years, the competition will run in two parts. Mother Tongue will allow entrants to choose a piece of writing in their home language (not English or Welsh) that is important to them. The entry will then be judged on the narrative written supporting the piece which should explain why it is important to them and their culture. Other Tongue allows entrants to get creative with a language being learned (French German, Spanish or Italian).

Over the next few months, young people across the country will have the opportunity to receive creative writing workshops that will be delivered by associates of Literature Wales and Cardiff University students.

This competition will also link into Cardiff University’s Book Kernel project being led by the School of European Languages, Translation and Politics. This project looks specifically at translating poetry and creating books live at translation events so that participants have an instant record of the event.

The winners of the competition will have their work showcased at the Llangollen International Eisteddfod in July and it is hoped that through the Book Kernel project, a book of the winners’ work will be published. All winners will also be in with a chance to represent Wales at a UK National Celebration Event in Manchester in the autumn.

Interviews with Ceri James, Director of Routes Cymru are available on request from Ellie Jones.