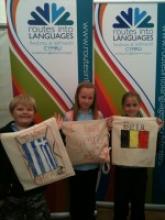 This year was the first year for Routes into Languages Cymru to visit the annual Eisteddfod in Llangollen, but it certainly will not be the last! We are pleased to report that we had a fantastic week. We met so many enthusiastic young linguists from all over the world that we came away full of energy and enthusiasm about languages in Wales.

Our first day on the field was certainly a busy one as we welcomed over 500 children to the stand who were attending as part of the Eisteddfod’s Youth Day. The visitors had a chance to design their own bag using flags and phrases in other languages as inspiration. Spanish and Germany proved to be the favourite languages of the day due to the pending World Cup football match between the two countries. The World Cup certainly sparked many a conversation about learning languages and travelling the world.

We launched a poster competition on the second day and before long we had many colourful entries decorating our canvas walls. This competition continued for the rest of the week and we certainly had a tough job choosing a winner each day.
The Llangollen International Musical Eisteddfod is a very special event. It brings people from all over the world together to showcase diverse traditions and culture at the same time as promoting a message of peace. We fell very privileged to have been a part of the festival this year and are looking forward to next year already!